There is an “epidemic” of wildlife poisonings on the Eastern Shore. It probably goes well beyond that geographically, but the U.S. Fish and Wildlife Service has gone above and beyond keeping this information from the public.

According to a U.S. Fish and Wildlife Service special agent that investigated the poisonings of 13 bald eagles found dead in Maryland in 2016, we have an “epidemic” of wildlife poisonings on the Eastern Shore – that took a lot of courage for him to admit that, because it seems the agency he works for doesn’t want the public to know about it.

It took me multiple e-mails, phone calls and ultimately the second of two Freedom of Information Act (FOIA) requests sent to the USFWS to get the results of what killed those birds. And apparently I have to do it again and again and again because of other cases.

When there is a public health epidemic for people, as far as I know, the Centers for Disease Control and Prevention (CDC), is very responsive informing the public about it. This type of information needs to be communicated to the public – because it saves lives. Because the public has a right to know.

The same isn’t true for the U.S. Fish and Wildlife Service and by the way, this “epidemic” of wildlife poisonings could have human health implications.

Birds and wildlife are dying at an alarming rate on the Eastern Shore. They’re dying by poisoning – through secondary poisoning from chemicals/pesticides intended for rodents that eat crops and through lead poisoning from ammunition.

These issues are bipartisan. This has been going on a for a long time.  Hopefully bringing attention to these cases will prompt action. It already has – the Maryland Department of Agriculture (MDA) will now be incorporating a presentation on this issue as part of the re-certification requirements for licensed pesticide applicators in Maryland.  It’s a start.

And  while licensed pesticide applicators will get a new presentation, how about the people that aren’t licensed? Let’s start with the farmers – I’m sure most are wonderful people. They wouldn’t be working the land if they didn’t love it. But there are apparently some that in trying to protect the land they love and which is providing their income, they’re poisoning animals that are trying to eat their crops. The farmers might or might not realize the consequences that those poisoned animals become food for the rest of the food chain and they die – as was the case with one poisoned raccoon killing 13 bald eagles.  Death by poisoning is a horrible, painful death. It’s not instantaneous. The animals suffer.  Let’s go beyond that though – if the pesticide is being used on or near crops  – crops that are then destined for human or animal consumption,  well, you get the idea.

How does this get stopped? A federally banned pesticide was used in the case of the 13 dead bald eagles. More education for farmers and pesticide applicators is needed. As is a willingness by the USFWS to inform the public of poisonings once their law enforcement cases are closed – not requiring a FOIA For. Every. Single. Case.

There are many hunters on the Eastern Shore of Maryland. I’m certain most are good people and I do know many of them. They clean up after themselves, they teach and preach stewardship for the land and they’re very responsible gun owners. They love the Chesapeake. Lead ammunition is all that they’ve known and all that they’ve used. It’s just the way it’s been. The problem is there will always be some animals, or parts of, left behind – maybe intentional, maybe not.  Whatever is  left behind becomes food for lots of other wildlife.  Also worth noting is even some of those animals that are killed with lead ammunition becomes food for humans.  What are the effects of lead on humans? Not good  – especially not good for children.

Short of wildlife rescue organizations trying to get the word out how much death and destruction they’ve seen from lead, to my knowledge, there hasn’t been much, if any, education aimed at getting hunters to switch from lead ammunition. Yes, there are alternatives. Why is it just the wildlife rehab facilities are sharing this important information? A few months ago, I was talking with an Eastern Shore hunter, who also happens to be a teacher – a good guy, a caring guy. He was shocked to learn about the lead poisoning issue. He truly had no idea. He said he would consider switching.

How does this get stopped?  If not a ban, education seems like a great idea. You might be asking why hasn’t there been a ban on lead ammo – it was banned in paint and gas. Perhaps there will be a federal ban on lead ammunition one day, but until then, hunting store owners, hunting guides and educators – why not go to something that isn’t lethal for the food chain (including humans)? Why not try to educate hunters  on the effects of lead on humans and wildlife?

What else will help? A willingness by the USFWS to release details of poisoning cases with the public and to work with state agencies that have a vested interest in and perhaps better knowledge of their local areas.  Why wasn’t the MDA asked to help with a case involving a banned pesticide? The MDA, the Maryland agency tasked with enforcement of pesticide violations,  shouldn’t learn about an “epidemic” of wildlife poisonings through media reports, but through cooperation of federal agencies with their state partners. I do appreciate the willingness of the MDA to share that information. 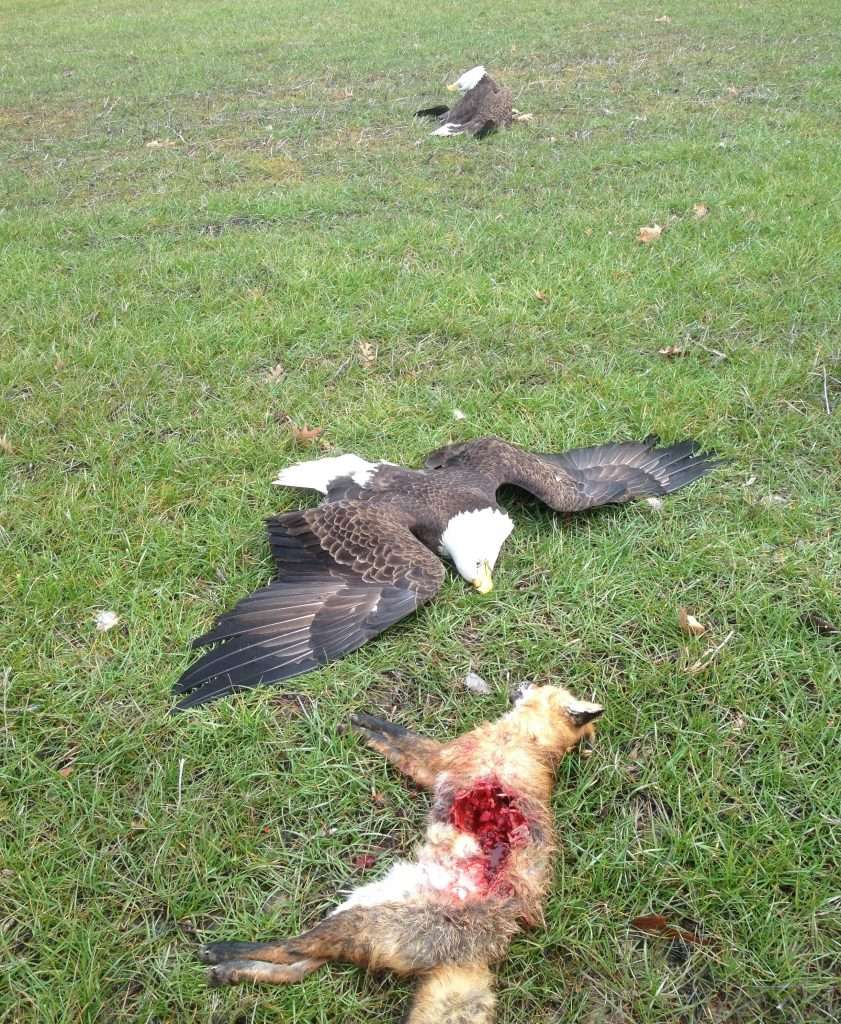 While we know 13 bald eagles and a raccoon died by carbofuran poisoning in 2016, we don’t  know how two  bald eagles and a fox died eleven months later (in January 2017) – they were found in a field in Easton, Md. by Troy Whaley, who fortunately found them in time to save a third bald eagle at the same site. 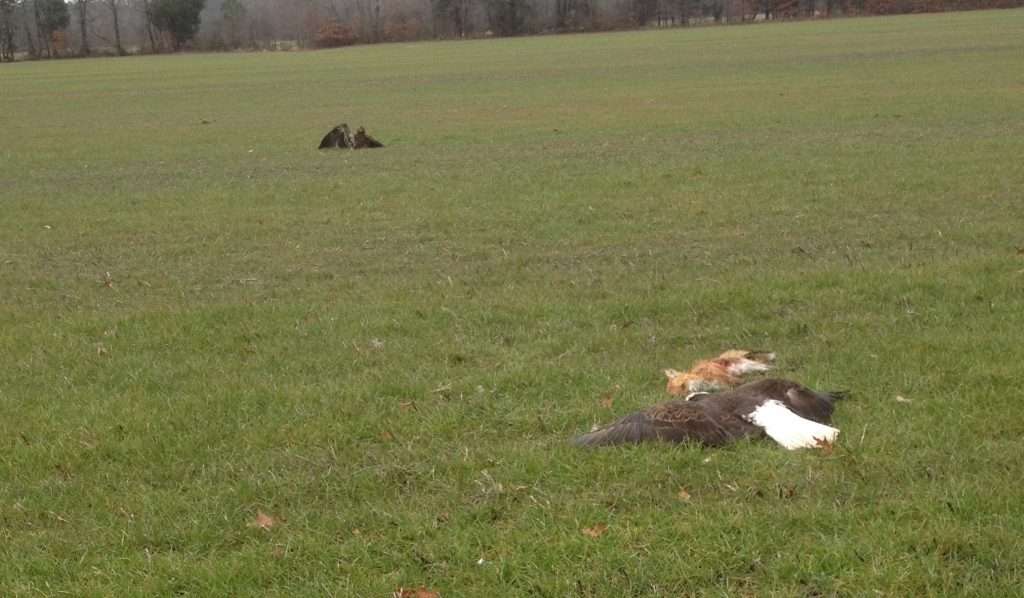 “That was the one bright spot,” said Whaley.  “At least I found them in time that they could save that one – the other two were already gone. I was just going to town to get some supplies and I saw them in the field – it just didn’t look right.”

The third bald eagle (photo below) was a juvenile. The other two were adults. 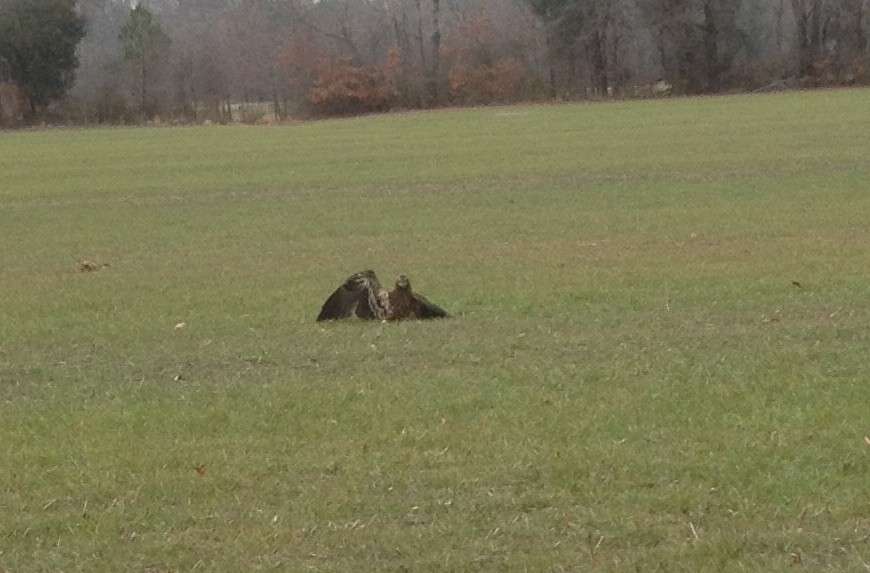 Whaley pointed out that though he’s not a scientist, he believes it was carbofuran that killed the fox and two bald eagles because of how little the birds had eaten and how little carbofuran it takes to kill – only the stomach (guts) of the fox appeared to be eaten.  Thank  you to Whaley for sharing the photos. If they’re hard to look at for you (as they were for me), imagine how difficult it was to see this horrific scene in person.

Because we don’t know what killed the two eagles and fox, I asked the USFWS about the case this week.

“I’ve been told that the case has been closed and that a FOIA would be required to get the information you request,” wrote Catherine Hibbard, a spokesperson for the USFWS. “Thanks for your interest in this case.”

Change is needed. The public has a right to know. And yes, I have an interest in all of these cases. If you know of others, please let me know.

By the way, I just submitted the FOIA with the backing of WNAV – thank you to to Steve Hopp, WNAV’s general manager.

2 Replies to “Opinion: An ‘Epidemic’ the U.S. Fish and Wildlife Service Doesn’t Want You to Know About”